What are CSS Animations?

CSS Animations are a feature of CSS3 allowing developers to animate an object becoming visible.

To define a CSS animation, one needs to define keyframes in terms of percent, then add the appropriate "animation" attribute to an object. In this article I will make a spinning newspaper animation using this image from The Simpsons (copyright warning): 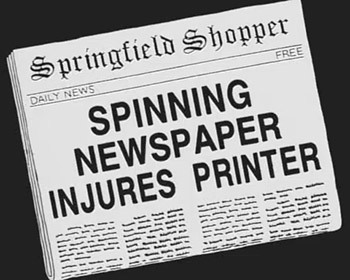 Much of what you would want to do with animations is available with the Transform property.

In this case, we'll be causing the image to spin and get larger, acheived through transform: scale and transform: rotate. Rotate takes a rotation in degrees. Let's start by making it spin twice.

(Be forewarned: this animation won't work in WebKit-based browsers, though it will work in Chromium-based ones.)

Scale takes an argument in size relative to 1 for some reason, and transformations are space- rather than comma-separated, so the way to scale the newspaper would be as follows:

Filter and Opacity are also commonly used with animations, and we'll use them for a nice fade-out:

Now let's create a CSS class with this animation enabled:

Make sure to include all of the final settings or else the animation will end improperly by transitioning into its default state.

The animation: property used here is a "combo property" that goes as follows:

Here's what the result should be in the end.